The Battle of Theories in Cell Physiology 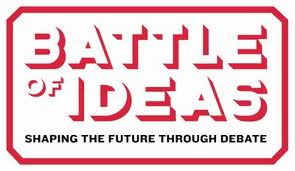 Evolution of the membrane and bulk phase theories

Two opposing concepts developed within the context of studies on osmosis, permeability, and electrical properties of cells. The first held that these properties all belonged to the plasma membrane whereas the other predominant view was that the protoplasm was responsible for these properties.

The membrane theory developed as a succession of ad hoc additions and changes to the theory to overcome experimental hurdles. Overton (a distant cousin of Charles Darwin) first proposed the concept of a lipid (oil) plasma membrane in 1899. The major weakness of the lipid membrane was the lack of an explanation of the high permeability to water, so Nathansohn (1904) proposed the mosaic theory. In this view, the membrane is not a pure lipid layer, but a mosaic of areas with lipid and areas with semipermeable gel. Ruhland refined the mosaic theory to include pores to allow additional passage of small molecules. Since membranes are generally less permeable to anions, Michaelis concluded that ions are adsorbed to the walls of the pores, changing the permeability of the pores to ions by electrostatic repulsion. Michaelis demonstrated the membrane potential (1926) and proposed that it was related to the distribution of ions across the membrane. Harvey and Danielli (1939) proposed a lipid bilayer membrane covered on each side with a layer of protein to account for measurements of surface tension. In 1941 Boyle & Conway showed that the membrane of frog muscle was permeable to both K+ and Cl-, but apparently not to Na+, so the idea of electrical charges in the pores was unnecessary since a single critical pore size would explain the permeability to K+ , H+, and Cl- as well as the impermeability to Na+, Ca+, and Mg++.

Over the same time period, it was shown (Procter & Wilson, 1916) that gels, which do not have a semipermeable membrane, would swell in dilute solutions. Loeb (1920) also studied gelatin extensively, with and without a membrane, showing that more of the properties attributed to the plasma membrane could be duplicted in gels without a membrane. In particular, he found that an electrical potential difference between the gelatin and the outside medium could be developed, based on the H+ concentration. Some criticisms of the membrane theory developed in the 1930's, based on observations such as the ability of some cells to swell and increase their surface area by a factor of 1000. A lipid layer cannot stretch to that extent without becoming a patchwork (thereby losing its barrier properties. Such criticisms stimulated continued studies on protoplasm as the principle agent determining cell permeability properties. In 1938, Fischer proposed that water in the protoplasm is not free but in a chemically combined form—the protoplasm represents a combination of protein, salt and water—and demonstrated the basic similarity between swelling in living tissues and the swelling of gelatin and fibrin gels. Nasonov (1944) viewed proteins as the central components responsible for many properties of the cell, including electrical properties.

The emergence of the steady-state membrane pump concept

With the development of radioactive tracers, it was shown that cells are not impermeable to Na+. This was difficult to explain with the membrane barrier theory, so the sodium pump was proposed to continually remove Na+ as it permeates cells. This drove the concept that cells are in a state of dynamic equilibrium, constantly using energy to maintain ion gradients. In 1935, Lohmann discovered ATP and its role as a source of energy for cells, so the concept of a metabolically-driven sodium pump was proposed.

The tremendous success of Hodgkin, Huxley, and Katz in the development of the membrane theory of cellular potentials, with differential equations that modeled the phenomena correctly, provided even more support for the membrane pump hypothesis.

The modern view of the plasma membrane is of a fluid lipid bilayer that has protein components embedded within it. The structure of the membrane is now known in great detail, including 3D models of many of the hundreds of different proteins that are bound to the membrane.

These major developments in cell physiology placed the membrane theory in a position of dominance and stimulated the imagination of most physiologists, who now apparently accept the theory as fact—there are, however, a few dissenters.

The reemergence of the bulk phase theories

In 1956, Troshin published a book, The Problems of Cell Permeability, in Russian (1958 in German, 1961 in Chinese, 1966 in English) in which he found that permeability was of secondary importance in determination of the patterns of equilibrium between the cell and its environment. Troshin showed that cell water decreased in solutions of galactose or urea although these compounds did slowly permeate cells. Since the membrane theory requires an impermeant solute to sustain cell shrinkage, these experiments cast doubt on the theory. Others questioned whether the cell has enough energy to sustain the sodium/potassium pump. Such questions became even more urgent as dozens of new metabolic pumps were added as new chemical gradients were discovered.

In 1952, Gilbert Ling became the champion of the bulk phase theories (almost completely isolated from the rest of biology for his cheek) and proposed his association-induction hypothesis of living cells.

The association-induction (AI) hypothesis is based on the concept that water in cells is in a unique state and that the living state does not exist without such water. This state is called polarized multilayers and relies on the spacing of polarized groups on the protein backbone to increase the effective distance over which they affect water molecules. Water in polarized multilayers is in a higher energy state than in bulk water and can differentially exclude solutes. The AI hypothesis holds that the majority of intracellular ions are adsorbed onto charged sites on macromolecules; the preferential adsorption of K+ being due to the inductive effect of the neighboring molecular groups affecting the electron densities of carboxyl groups on proteins. Surprisingly, this apparently radical theory yields almost identical experimental predictions as the membrane pump theory for most questions. Ling and others have doggedly pursued the areas where there seem to be differences in the predictions, and have claimed success in showing that the AI hypothesis is the better.

Biologists, unlike physicists, seems to show very little inclination to question the fundamental building blocks of the modern conceptual model. Thus Ling and his followers have been largely ignored or dismissed as crackpots. Interestingly, Raymond Damadian, the inventor of MRI based the idea on the AI hypothesis. At worst, they have exposed many weaknesses involved with treating cells as bags of salty water. 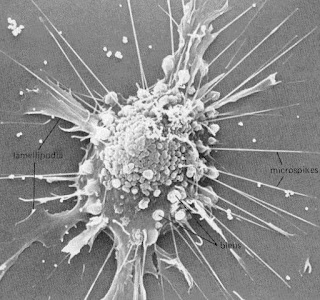 The outside of a cell is a complicated structure.
http://people.ucalgary.ca/~kmuldrew/cryo_course/cryo_chap3_2.html
Posted by Keenan at 8:08 AM